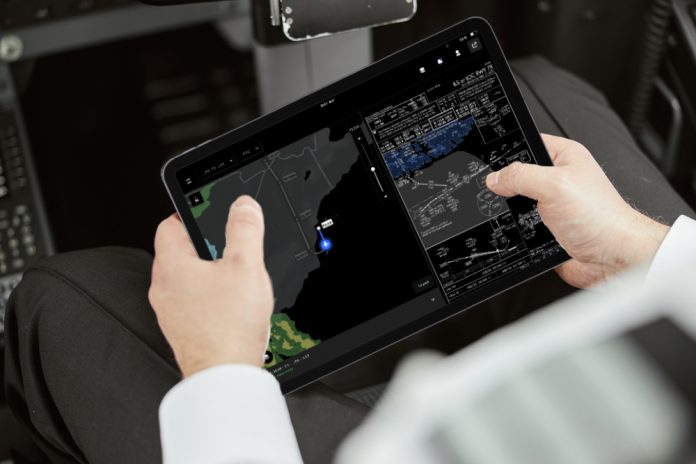 Recently, Collins Aerospace announced its FlightHub Electronic Flight Folder (EFF) as part of its initiative to simplify and improve the EFB experience for pilots and improve their access to information. In effect, the FlightHub EFF solution is just one tool enabling a more connected aviation ecosystem, but it’s a tool that can make the jobs of pilots and flight crews safer and improve operations for airlines.

Once viewed as little more than a replacement for heavy paper flight bags, the use of tablets in the cockpit has become a critical component of a pilot’s toolbox. Combining pre-flight documentation with other crucial information, solutions like the EFB provide the crew with everything they need from weather reports to fuel usage breakdowns.

“We looked at how to treat the flight deck as if it were on the ground and had the same type of connectivity and Wi-Fi capability that is in an office or a home.” — Jon MERRITT

Speaking in a recent podcast, Collins Aerospace’s Jon Merritt, Associate Director, Flight Deck Applications and former Director of Flight Operations for United Airlines, noted that the innovations in EFBs have come about thanks to the industry’s work on connected aircraft. While initially focused on passenger connectivity, Merritt said that Collins Aerospace began to explore applications for the flight deck. “We looked at how to treat the flight deck as if it were on the ground and had the same type of connectivity and Wi-Fi capability that is in an office or a home,” Merritt began. “Using that asset to connect the EFB with various applications has become and will remain key when looking at the next generation of applications.”

As connectivity in the cockpit has increased, the evolution of the EFB over the last decade has pushed functionality and capability well beyond their initial intended usage. “The last decade has been full of opportunities and challenges,” Merritt said. “Innovations such as the EFB have moved beyond their initial scope… and in doing so have primarily been about creating or working in a field of innovation focused on the consumer device.”

“If a pilot wants to review ten different data strings or elements, they will typically have to look at ten different applications,” said Merritt. He noted that this is incredibly inefficient and added that. “FlightHub can pull in those data streams, aggregate them, and make them more available through a singular application.”

Overcoming application bloat and delivering the correct information when it is needed to the pilot was one of the reasons why Collins Aerospace introduced its FlightHub EFF solution. “[We thought about] how to create a resource that can be ready for whatever the crew could need, before it happens,” Merritt said. He added that the procedural process of flight makes it possible for FlightHub to serve them the information they need, just as they’re about to need it. “FlightHub is designed knowing pilots will look for certain things at certain times, that their workflow is very specific to a phase of flight,” he said.

“we are looking to bring digital transformation to flight decks and bring them out of the analog mindset. That is really what our focus is at Collins, and we are excited to be a part of the rapid innovation our industry is seeing right now.” — Jon MERRITT

But application bloat isn’t the only challenge pilots face with their EFBs. Merritt, who stays connected with airline executives and operators, noted that while there have been great strides in connectivity there are still limitations. “It’s just not the same environment in a flight deck at 40,000 feet,” he said. “One example I hear from pilots is that there is no easily accessible help desk. They can’t pick up a phone and call a helpline to troubleshoot things like login difficulties, connectivity issues, or whatever their issue may be.”

One way that Collins Aerospace is looking to address issues like this is to work closely with pilots and understand the most common problems they experience. From there, Merritt noted that they can focus on creating a user interface that can provide solutions that have worked for other pilots. “This collaboration with pilots means that when they are using [EFB] software it allows us to say ‘Yes, we can solve for that problem,’ or to provide a very understandable solution for a pilot who is basically by themselves at 40,000 feet,” he said.

When asked to look at the future and how connectivity will continue to shape and evolve the way airlines and flight crews operate, Merritt noted, “Our industry is very used to doing things in an analog way, however, we are part of this digital revolution. Looking ahead to the next five years, we are looking to bring digital transformation to flight decks and bring them out of the analog mindset. That is really what our focus is at Collins, and we are excited to be a part of the rapid innovation our industry is seeing right now.”

To learn more about EFB and how Collins Aerospace is approaching the digital future of aviation, click here.