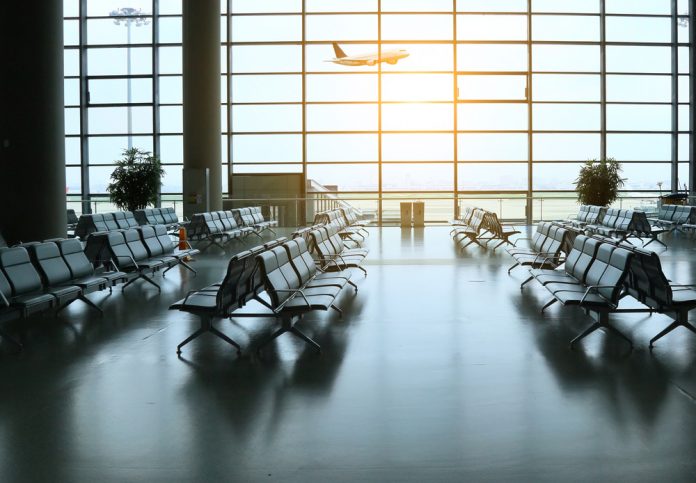 As a recent International Airport Review article explained, the increased awareness of aviation’s contribution to the climate crisis worldwide has put pressure on airport operators to shrink their carbon footprints and become more sustainable. Thankfully, a new $1B grant program from the Federal Aviation Administration can be leveraged by airports to help increase sustainability.

These grant dollars can be used for a number of different purposes – from increasing accessibility, to improving concessions. But they can also be used to purchase new technologies that can, among other things, make airport operations greener.

Here are four ways in which flight data, connected cockpits, improved terminal systems, and the introduction of biometrics can make airports more sustainable:

Improve arrival and departure with data
By utilizing more accurate, real-time data from airplanes and connected cockpits, flight towers and maintenance crews can optimize the airspace, and the operation of airplanes on the ground.

If one aircraft experiences flight delays, weather problems, or traffic jams, that plane’s pilots can let those behind him or her know in advance, enabling flight paths to be adjusted to help reduce congestion in the airspace above the airport. Ideally, reducing the time planes spend circling airports can result in fuel savings.

“If the airport has better transparency into take-off and landing times, it can plan better and operate more efficiently.” – Augusto Santos

Or, if there is a problem with the aircraft and it needs to be taken out of service, another plane could be ready and waiting to take over. This reduces turnaround times, increases overall efficiency on the ground, and makes it so that more flights leave on time.

Eliminate fuel waste on the ground
Planes can churn through a massive amount of fuel while on the ground so suboptimal aircraft operations can contribute significantly to an airport’s carbon footprint.

Improving the operations of the airport would provide aircraft on the ground with clearer takeoff and landing times. This would help pilots save on fuel usage while on the ground and decrease taxi time.

“Cleary, if planes depart and arrive when they’re supposed to, less fuel is used.” – Augusto Santos

It could also allow them to make small operational changes that increase fuel efficiency. For example, if an aircraft is completely boarded and ready to go, but there’s time before its takeoff window, it could potentially push back using one engine instead of two. This small change has the potential to save a large amount of fuel and reduce the amount of carbon released into the atmosphere.

In addition, by giving gate crews more precise information about when a plane will land, they can be better prepared to open the gate as soon as the plane arrives – cutting down the time aircraft spend on the tarmac filled with passengers and wasting fuel.

By accessing, aggregating, visualizing, and analyzing flight data, airline and airport staff can eliminate these inefficiencies so that planes aren’t sitting on the tarmac or waiting in a line to take off – all the while unnecessarily burning fuel.

Improve the flow and operations of airports with biometrics
Airport biometric solutions can provide a contactless method to validate identity and can rapidly accelerate processes such as customs and security screening for passengers. By reducing queuing, airports can utilize their HVAC systems more efficiently to cut down on the amount of power used for air circulation and cooling/heating in these areas.

Biometric technologies can also help with things such as providing personalized information about gate arrival, baggage claim, and boarding, which make getting around the airport more efficient for passengers. This would also eliminate the need for paper boarding passes, receipts, and bag tags, which further increases sustainability.

Streamline the routes of ground service vehicles
We’ve all looked out the windows of an airport and seen ground service vehicles moving passengers, baggage, and even catered food between terminals and aircraft. Often, these bags, catered meals, and passengers are being ferried long distances because of the suboptimal parking position of different connecting flights.

Planes can churn through a huge amount of fuel while on the ground so suboptimal aircraft operations can contribute significantly to an airport’s carbon footprint.

Looking at flight and passenger data, airlines and airports can assign connecting flight gates that are closer together, reducing the need for extensive ground transportation between distant terminals, saving fuel and time.

Having a better operational understanding of the airport and all aircraft takeoff and landing times could also enable more optimized aircraft gate assignments. This can help streamline the routes baggage handlers and catering companies take to service aircraft. It can also enable the creation of planograms detailing where particular aircraft are located, making it easier to find and service them, and eliminating a large amount of travel while searching for the correct plane. These streamlined routes would cut unnecessary fuel consumption.

“If the airport has better transparency into take-off and landing times, it can plan better and operate more efficiently,” Augusto Santos recently told Connected Aviation Today.

This is just the tip of the iceberg on what data can do to help make airports more sustainable. Taking these and other steps to improve airport operations can help increase efficiency to improve the eco-friendliness of flying the friendly skies, making air travel greener and more sustainable in the future.

As an airline operator, what should you ask a biometrics vendor? Find out HERE.